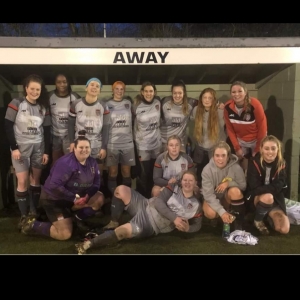 Our new year started with a trip over to take on higher league opponents Sheffield Utd Reserves in the League Shield Competition.

Our ladies were down from 15 available to 13 due to 2 players having car trouble!

We started off evenly with both teams testing the defences without any problems and then on 15 minutes a momentary lapse saw the hosts take the lead 1 - 0.

From the kick off our ladies were chomping to get back into the game and on 17 minutes, Nnola broke free down the left, cut inside and delivered an exquisite finish into the top right corner 1 - 1.

We scored again on 22 minutes from a corner that Skitt took and then had a second bite from the right hand side she guided her curling shot into the left hand side of the goal.

We could have put the game at least further out of reach with Mollie being denied only by a great save by their keeper.

I had warned the ladies that United would come straight out of the blocks and in 90 seconds of the second half they had scored to even up the game 2 - 2.

Our ladies then enjoyed some dominance of what was mostly fought in the middle third or in the opponents half, Nnola switched sides with 20 minutes left as the pitch was deteriorating down the left and instantly had an impact driving to the bye line and laying a ball on a plate for Olivia to slot home on 73 minutes to make it 2 - 3, and 2 minutes later did exactly the same for Olivia to slot home her second of the game and take the score to 2 - 4 with 15 minutes to play.

Rather than sit back and try to soak up the inevitable pressure we asked the Ladies to play as they had been; on the front foot and taking the game to United.

United scored with 9 minutes remaining to make it 3-4 but with the threat of having to play an extra 30 minutes our ladies saw the game out.

What a win, against opponents who were clearly confident in beating us before a ball had been kicked.

Today was a fantastic team performance having been 2 down before we started, we had 2 players who had run a half marathon in the morning and still they all fought for every ball.

Every player worthy of a Player of the Game today, however that accolade went to Chelsea who was brilliant at the back and didn’t put a foot wrong.

Well done Chelsea and well done Ladies, we march on to the next round.