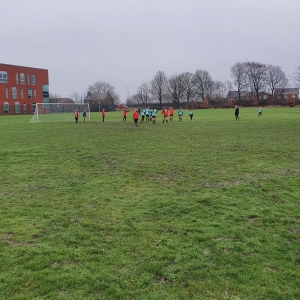 With many games called off this morning due to the recent wet weather, an early morning pitch inspection was required to see if the game was playable. After some maintenance to remove standing water, the pitch looked ok and both teams, alongside the referee decided it was game on!

We knew that it was going to be a difficult game against top of the table Crosspool and although neither team had yet to be defeated in the league this season, for either to retain this record, it wasn't going to be easy.

The game started evenly matched with Crosspool winning the majority of the 1st balls. We had talked about this before kickoff as well as taking an extra touch on the ball and although the conditions were not in favour of playing quality football, both teams tried their best to play football.

With a couple of players missing from todays team, we were forced to make some positional changes with girls asked to fill gaps and mid way into the game, everyone seemed to settle into their positions. We knew that Crosspool played with strength and enjoyed playing quick attacking football and our defence stood strong in the early stages of the game. We got caught out for the first goal with a ball through from midfield which was run onto by one of their quick attackers. Her pace on this occasion gave her the advantage and she slotted the ball home.

Our heads didn't drop and we kept going knowing that neither side had really dominated the game so far. The game was scrappy at times with players slipping over or mis-judging the bounce of the ball at just the wrong time but everyone kept working and it looked like we would head into half time only just behind. However, a couple of minutes from half time, Crosspool picked up the ball just outside the box and a clean shot somehow managed to navigate the sea of players in front of goal, hitting the back of the net.  Half time 0-2

At half time, the message was just about winning the individual battles on the pitch. The game was close and shots on either goal were minimal so the battle in midfield was key to winning the game today.

We started the 2nd half strong straight on the attack with Hollie using the width of the pitch (and the less muddy bits) to our advantage to drive the ball forward. Freya L also managed to attack along the right hand side of the pitch in a similar fashion but our attackers couldn't quite get the ball out of their feet to release any shots with venom.

With the pitch getting muddier, you could see that it was becoming more difficult to play attractive football and so the need to win the 1st ball was becoming more important to release the attackers at the first opportunity. The second half was very close and the next goal could have been the game decider but it wasn't to be on this occasion for Charnock as we couldn't break down the Crosspool defence.

Crosspool sealed the win with their 3rd goal right at the end of the match. A looping strike from outside the area left Ellie literally stuck in the mud and unable to reach it.

I felt for the girls today as they battled in awful conditions and were not able to take anything from the game. Paul and Chris were missing from the sideline today and even though the result didn't go our way, we are all proud of the performances the girls gave.

Player of the match today was Leah. She had to mark numerous players and play in multiple positions today as Crosspool switched things around and continually filled the gaps when needed switching us from a back 3 to a back 4 in defence when required. Our other defenders also stood strong again today with Morgan, Evie and Ellie S doing a fantastic job. Our heads didn't drop across our players and Crosspool had to work hard for their victory today.

The first game back after the Christmas break was always going to be tough but there were plenty of positives and we will take these into training next week to get us ready for our next game.

Thanks to the referee for keeping the game flowing as much as possible, for the parents who helped set up and take down the equipment in the rain and to Ryan for helping on the sidelines today.

Well played Crosspool, we enjoy these games and hopefully the next time we meet it will be a bit drier.