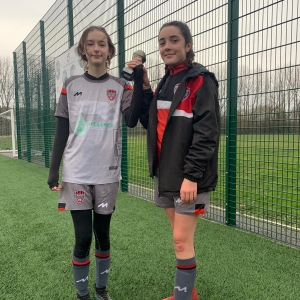 Today saw us travel to Steel City U14s who we had previoulsy beaten 4-0 in our last meeting home game so the girls were feeling naturally confident.

As we arrived we realised we would be playing on the full size pitch and with no sub’s, we realised it was going to be a tiring game.

Steel City started the game well and went straight on the attack but Ruby, Iris, Scarlett and Milly who had stepped in to defence for the game all were brilliant in keeping Steel City out. Charnock then got in to the game and started playing some good football and with the pitch being so big, we started to exploit the space behind their defence. Shola and Evie were making some excellent runs in behind but couldn’t beat Steel City’s keeper who made some excellent saves however in the closing minutes of the half, Keris and Poppy put pressure on in midfield, winning the ball back and putting in a cross for Lizzie. As Lizzie tried to make room to shoot, a little too much agression from their defence resulted in a penalty for Charnock.

There was a delay taking the penalty whilst Lizzie recovered however when it was time to take it, Shola stepped and she slotted it in to the bottom corner ending the half 0-1.

The second half started pretty much the same as the first but again Charnock stood stong with Asha playing centre defence midfield protecting our defence with another excellent performance, which resulted in Ella in goal having little to do at times.....which in my book is a very good thing.

We kept attacking the space in behind their defence and Shola managed to get her second goal half way through the second half making it 0-2. The score could have been more with Keris, Evie and Shola all going close and an excellent run from Iris all the way from the edge of her own area to the opponent’s but just couldn’t manage to get a shot in.

The game finished 0-2 and as usual all the girls played brilliant and all kept their heads on the game and not on the things around them.

Players of the match were Lizzie and Poppy who both battled for every ball and displayed some excellent passing and running with the ball.

Well done girls, you are always out there with a smiles on your faces which makes us all proud.