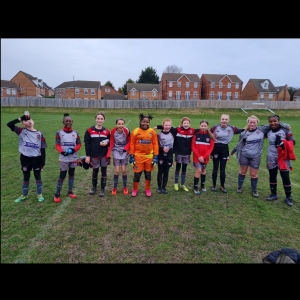 Today saw us visit 2nd in the table Dronfield Town who earlier in the season had given us a beating in our 1st home game. This was our last game of the year and the girls arrived with smiles and ready for the game, we were missing Charlotte and Evie for this weekend’s game, and it was a dry morning after last week’s drenching.

After last week’s defensive display Marnie was this week’s captain. Looking to play a stronger defensive display today, I went for a 3 at the back with Daisy, Marnie, and Neiva a back 3, with Evlyn and Isabelle in the middle of the park, with Amber and Violet playing wide and Harmonie up top. We knew after the last game against Dronfield they were a good physical side so our aim today was to try and match them.

It was good start to the game with girls matching Dronfield and getting stuck in and playing some good football. Dronfield were strong in defence and Harmonie was giving her all up top along with forward runs from Violet and Amber, Isabell and Evlyn were battling in midfield and the defence were staying solid but Dronfield eventually got through and at HT the score was 2-0. We had created a few chances but failed to beat the Dronfield keeper, a couple falling to Harmonie and a gutting offside call for Violet who would have been clean through, even the opposition coach said it was the wrong call but the girls were still in high spirits at Half Time, I told them to carry on as they were keep up the hard work.

The 2nd half matched the 1st, I switched it about with Evlyn dropping into the back 3 while Neiva was off and Tamzin and Niana in the Middle with Niana supporting Harmonie we just couldn’t break the Dronfield defence down but kept trying, with Harmonie, Amber, Violet, and Niana causing them issues.

Again it is becoming harder and harder each week to pick a player of the match, the girls are improving as a team every game. Today was Harmonie’s best game and Amber battled hard and was fouled numerous times but never gave up, but today’s Player of the Match has to go to Evlyn who is continuing to get stronger each game and today was asked to play in a new position in the 2nd half and didn’t look out of place and did everything asked of her. Amara was her usual confident self in goal coming out and throwing herself on the ball.

Today’s game showed how much the girls have improved, and we look forward to the start of the new year and more improvement as a team and as individuals. It was pleasing to see that after the game the girls were all smiling and having fun together and the parents acknowledging the improvement the girls have made, and the 4-0 defeat was not too disheartening for them as they could see how much they had come on.