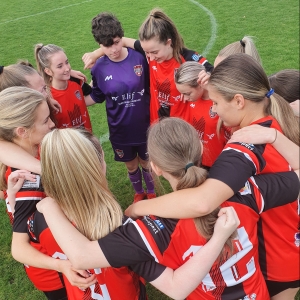 This week we went into our second league game, against Sheffield Wednesday again, playing them back to back games. After last week's draw this was always going to be another challenge for the girls and they didn't disappoint this morning. Told the girls after SWFC threw away 0 v 2 lead last week they were going to be right at it this morning wanting to make amends.

Our squad was very stretched this morning only having one sub. I decided to change formation, we had a lot of midfielders missing this morning and I wanted to give our defence half a chance so I went with a 4-4-2 to give us more cover in defence especially after seeing SWFC last week they are very good in wide areas.

From the beginning Charnock took the game to SWFC by playing in their half, winning lots of throw-ins and keeping the ball well in Sheffield Wednesday's half. The first 20-minutes we looked dangerous going forward, and keeping SWFC to little chances then the breakthrough came.

The referee gave a drop ball to us, Molly did excellent by playing the ball over top of SWFC defenders when Lilly P raced on to it, still quite a bit of work to do but did a lovely lob over the keeper to make the score 0 v 1.

SWFC came back at us but our defence stood firm and keeper Ellie made some great decision-making coming off her line to clear the danger. SWFC really put us under pressure the last 10 minutes, had a few tired legs but we stood firm going in at  H/ T 0 v 1.

Charnock again started the second half doing the early pressing, looking quite comfortable with the lead and very unlucky not to make it 0-2 with a great passing move with Megan and Lilly P linking up well, but Lily P couldn't quite get a strike away from the edge of the box.  Midway through the second half a few of our girls were struggling with injuries but somehow they managed to stay on the field and performed miracles.

Then our reward came with the second goal. This time it came from a terrific corner by Leah finding the near post where Megan somehow managed to do an overhead kick and the ball flew into the bottom corner, making it 0 v 2.

This was fully deserved and we could have scored more goals as we were playing fine attacking football. Best move with one-touch football found Megan on the edge of the box, she just missed the far post. SWFC kept coming at us in the last 10 minutes where keeper Ellie made a fine save then our defence cleared the danger.

Overall a fantastic achievement getting 4 points over our two matches against SWFC, who are very good team and will be up there at the end of the season.  We were so pleased with the girls attitude this morning as well as their football ability - a great team performance. So many players were carrying knocks during the game and showed great character to carry on.

All 12 girls this morning should be very proud of themselves - you got your win for your efforts, commitment, and football ability this morning big well done.

The fixtures don't get any easier, we’re playing Chesterfield at home next week - looking forward to this one.

Rotherham United Whitehill Girls U11 v Charnock Girls U11 - Under 11