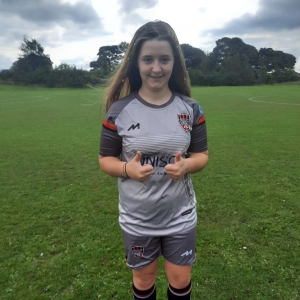 Playing at home against Thorncliffe for our first match of the season.

Before the game the objectives were to work hard for each other, have the right attitude, and what the Ref says goes...as well as enjoy themselves. Every player did that and more. The team worked extremely hard for each other and supported each other when mistakes were made.

It was a good game to watch and evenly matched I felt in first half, with Thorncliffe scoring first before a good team goal finished by Ella.

The second half saw us take more possession of the ball for most of it, with our second goal coming from a scramble on goal mouth from Rebecca - well deserved for her persistence in running on and off the ball.

Player of the Match goes to Chloe C, who volunteered to be our Keeper today as our usual Keeper was injured. Chloe pulled off some amazing saves, dominated the box with very safe hands. Comment from the opposition manager was if I hadn't told him she wasn't our Keeper he would have never known and also said she was player of match in his eyes. So very well deserved.

Very proud of all the girls today, and hope this win will give them confidence going forward.