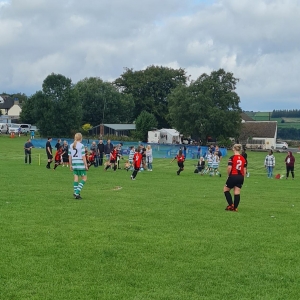 Our new looking U12 Purples played their 1st game as a team today after splitting the girls in the summer for the U11's to drop down to their own age group. We recruited several new girls at both age groups and in what was a tough summer to get a session where all the girls were training together, we had 9 girls confirmed to play in today’s 1st match of the season against Hallam Rangers JFC Whites.

All the girls arrived with smiles and excited to play, Iain took the Defenders to work together, and Ed took the Midfield and Forwards to work on passing and moving while I worked with Amara on distribution and handling in the warm-up.

Going with a 1-3-4-1 formation from the off the girls, some of which playing their 1st games, really gave it a good go and didn’t look out of place against Hallam. Our 1st goal of the season was scored by Harmonie, from a nice-weighted pass from Charlotte, Harmonie managed to power her way through to put it in the net. Our 2nd goal just before Half Time, with a good run by Amber from the half way line and a good finish, meant the half time score was 6-2 but not as one sided as the score suggests. The girls played so great passing and moving and with Evie marshalling the back line there were plenty of positives to take.

At Half Time Amber had to leave so we dropped to 8 but so did Hallam, Tamzin took over in goal and Amara joined Evie in Defence as we changed to a 1-2-4-1 formation. Again some nice passing and the girls really showed a resilience to never give up and soon after half time a spell of pressure and good pressing from the girls led to Niana popping up with a goal. Both teams had chances and some excellent individual play with the last kick of the game, and goal of the game, from Niana who put the ball in the net from outside the box to make the final score 8-4. But more impressive was that the girls had battled to the end and managed to draw the 2nd half 2-2 seeming to get stronger as the game went on and finishing strong.

Plenty of positives today, the girls were all amazing and it was hard to pick a Player of The Match but today among the many stand out performances Evie, who was asked to play the vital role in defence today, really stood out. She tracked and covered and was never out of position and made the opposition work hard for their goals today.

Evie – POTM performance, did everything she was asked and marshalled the defence

Amber – strong runs and good on the ball

Charlotte - grew into the game, got stuck in and a great pass for the 1st goal

Niana – a tricky player, worked hard and took her goals well with her 2nd the goal of the game

Violet – always looking for the pass, good on the ball, excellent play covered all over the pitch