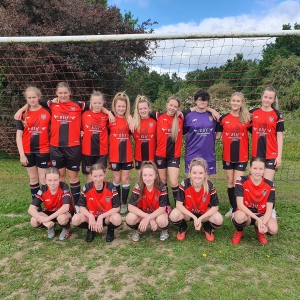 We eventually played our semi-final after a 2-week break from our league groups, welcoming Crosspool Girls. We probably drew the favourites to win this cup, so it was always going to be a challenging game for us.

We went into this game in great form, winning our previous 4 games and it was a lovely morning for a game of football. We started off quite well, giving Crosspool no time on the ball and during the first 20 minutes we were pressing Crosspool in their own half. Our initial pressure didn’t cause them too many problems and their defence stayed strong.

Halfway through the first half, our best chance came when a ball looped over the top of the Crosspool defence and Lilly P raced on to it. We all thought she was going to chip the Keeper but a last ditch tackle from Crosspool denied her. We kept pressing and a lovely move from a corner when Leah played the ball short to Evie, who put in a lovely cross was begging for somebody to get on the end of it. Good defending again kept it out. We had a great free kick delivery from Morgan, dropping right into the box but it was another one to be denied again. We kept going and Crosspool didn't threaten our goal much during the 1st half and it was turning into a really good first half for us, keeping the Crosspool danger players quiet with some excellent defending. We went into half time 0-0 and were the slightly better team with more chances on goal.

People say that football is a game of 2 halves and Crosspool came out fighting, taking only 30 seconds to take the lead with a lovely finish giving Ellie no chance. Before a blink of an eye, it was 0-2 and Crosspool had really upped their game and we were struggling to cope with them. We were losing the first ball challenges and getting put under all sorts of pressure. We contained them for 10-minutes and tried hard to counter attack but then the floodgates opened and it wasn't long before Crosspool made it 0-3. After this goal went in, I saw some of the body language from the girls drop a bit as they knew the semi-final was slipping away from them.

Giving credit to Crosspool, they showed that they were an excellent and very strong team. The score line was a bit harsh on the girls but the finishing from Crospool in the second half was brilliant. They managed to score 4 more, well taken goals, making the final score 0-7. Overall, Crosspools 2nd half  performance won them the game and they deserved their final next week. Best of luck to them.

It was nice of the Crosspool Coach to praise our girls for their efforts and agreed that we didn't deserve the score line.

It was very disappointing to finish the season in this way but we have to bounce back from this and learn from our mistakes. I thought our girls were excellent in the first half, really containing our opposition but we need to learn how to do this for 80 minutes in a game because good sides punish you at this level.

It has been a great achievement again for this team getting to a semi-final and hopefully next year, we will make the final. I said to the girls after the match how proud we all are of them. It has not been and easy season with the lockdown situation but overall, we have made progress this season and are in a really strong position in the league.

I’ve really enjoyed managing this team again this season and I couldn't wish for a better bunch of girls. I want to thank my coaching staff for their hard work with the girls and the progress the girls are making on the pitch. I also want to thank all the parents for your fantastic support again and I hope you have enjoyed this season and the girls have entertained you. I’m now looking forward to taking this bunch of girls, and a few new signings to play Under16 next season.