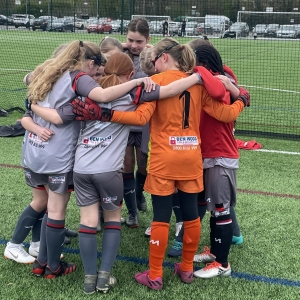 Playing at home for the second game of the post-season cup. Lovely and sunny conditions, perfect for a match.

Starting off with a back three of Grace in goal, and Evie M and Erin in defence. Grace has begun to command her area much better in recent weeks, and Erin is becoming more aware of the game in front of her and able to anticipate the play better. Evie May is always organised and more than happy to put her foot through the ball for a clearance. The midfield trio of Poppy, Jess, and Emily, with Niamh up front looked quick and strong. Poppy making some driving runs on the right wing and putting in a couple of great crosses that no one managed to get on the end of. Jess was her usual tough tackling self, and the addition of long throws to her game is only going to benefit the team going forward. Emily has recently gained more confidence to run with the ball and Niamh is becoming a lot stronger up front and managing to hold her own up there against defenders.

Doncaster Belles came at us strongly from the opening whistle; they were initially quicker, stronger and more organised. Charnock struggled to get going in the opening 5 mins and Doncaster soon took the lead with a lovely strike across the box into the bottom corner.

The first half was dominated by Doncaster, whilst Charnock struggled to really get a hold of the ball or the game. Substitutions helped, with Merci adding a bit more pace on the wing, and Lacey’s organisation in defence. Despite this improvement Charnock went in 2 down at half time. It could have been more had it not been for several fantastic saves by Grace.

Second half and Charnock seemed to snap into life. Coach May must have had some inspiring words for them during the break because they came out with much more intensity and desire to get hold of the ball. Pressing the opposition faster, they had more of the ball and better chances. Despite this, Doncaster managed to get a 3rd goal on the break.

Charnock didn't let their heads drop, and a change upfront bringing Evie May up and dropping Niamh into midfield made a big difference. Evie was able to close down the defenders whilst Niamh, playing in the middle, was able to pick up second balls to allow Charnock to break faster. The pressure from Charnock finally paid off when a cross was handled in the box by one of Doncaster’s defenders, and the ref pointed to the spot. Merci stepped up and dispatched it calmly, 1-3. After that, it was all Charnock attacking wise, Doncaster seemed to have run out of steam. Poppy had two great strikes from outside the box that went narrowly wide, and Emily had a great chance at close range but just couldn’t quite get her shot away.

Despite finishing 1-3, Charnock’s second half was much improved, and their attitude couldn’t be faulted. They just need to play like that, and concentrate for two halves of a game and better results will come.

Girl of the game - Grace