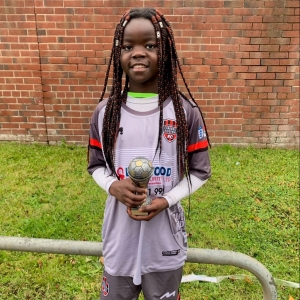 This week we travelled to Barnsley Ladies, all the girls looked brilliant in their new kit and were raring to go.

We started really positive and were on the front foot from the off, the girls have worked hard on passing and movement in training and it paid off to create our 1st chance of the game, Poppy winning the ball in midfield and driving forward and playing a great through ball to Sienna who had pulled away from defender creating space for herself to run through and have a shot on goal.

Barnsley grew into the game and had few chances a themselves but the girls battled hard in midfield tracking and tackling, Niamh and Emily were excellent. Jess and Evie were solid in defence making last ditch interceptions.

In the second half we moved Honey from midfield to striker, she worked hard causing the defence problems every time the ball came forward and had a couple of attempts at goal.

Merci’s trickery was a constant threat and she continued to create chances for herself and teammates, her link up with Poppy and Honey is getting better each week.

This was an end to end game played in the positive manner and was great game to watch.

Girl of the Game Merci