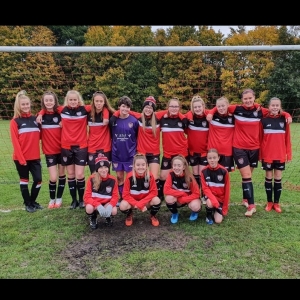 Really looking forward to the game this morning after a terrific start to the season winning last week. The girls looked fabulous in the new kits.

When we played Hallam Rangers last season, they were both really close games so I didn't expect anything else this morning. Yet again we started off very slow, something that we need to improve on quickly. It was all Hallam Rangers asking the questions, we struggled to get hold of the ball and could easily have been a few goals down early on. It was no surprise when they scored their goal. A Hallam striker hit a shot at Ellie, it bounced off her and we were slow to react and the girl poked the ball home making it 0v1. We weren’t really troubling Hallam in defence, a couple of long-range shots but their Keeper dealt with them comfortably. We came in at H/T 0v1. You've got to give Hallam credit they played really well in the first half and we were lucky to come in only losing by 1. It was such a disappointing first half for us.

There were a few harsh words to the girls at halftime. We weren’t putting any tackles in, looked very slow and didn't seem to have any effort there. But to give credit to the girls the second half was much improved. We started winning our tackles, looked more up for the challenge and started to believe in ourselves. We started creating quite a few chances, the best one falling when Sophie played a lovely ball to Megan who broke through, to be denied through a fine save for from their Keeper. We kept going, missing more chances and finding their Keeper in fine form. Hallam hardly threatened in the second half and I just thought it was matter of time before the equaliser but unfortunately it never happened, although not through lack of trying. So, it finished 0v1 to Hallam.

Overall, really disappointed in the first half - we have got to start off quicker and brighter and not wait for the opposition to dictate play. But second-half much improved and unlucky not to get the equaliser. Very frustrating morning but credit to Hallam.

Thank you Natalie for doing the raffle this morning and raising us some extra money after paying the referee, and everybody who helped out setting stuff up.