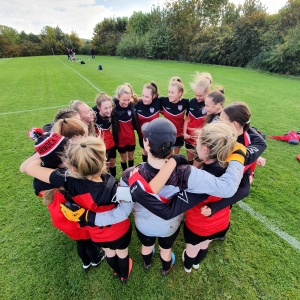 It was a special buzz waking up this morning knowing it was our first league game of the season. After a fantastic pre-season I was just praying that the girls could continue their great form into the league. And we weren't disappointed, beating Rotherham for the first time.

Rotherham started off quite strong and pegging us back for the first 10 minutes having a few corners and a few chances but never really testing Ellie in goal. Very happy how we stood up to Rotherham defending really well and looking solid. Then we started to play like we have been doing in pre-season, playing some lovely football and creating chances only to be denied by their keeper several times. Megan was unlucky with a few chances, same with Lilly P. Then the best movie of the game came on the left-hand side, the ball found Lily S who hit a lovely shot to be denied again. Then finally the breakthrough came with a lovely ball from Leah playing it across the box then it got a touch on to Freya at the back post who slotted it home lovely making the score 0v1. At this stage the match was getting a bit stretched, then Rotherham had their best chance when their striker was through to be denied by Ellie. The girls were doing really well, Rotherham were playing slightly downhill first half with the wind going for them but our girls really stood up and matched them so we went in at H/T 0v1 up.

Second half we were kicking slightly down the hill and started off really brightly, Rotherham really struggling to get out of their own half. We were causing them real problems getting behind their defence several times but just couldn't manage to get the second goal at the time. Rotherham hardly threatened us in the second half and it was a matter of time before we scored. Again, Leah with a second assist played a lovely ball through to Lilly P who took a touch then slotted the ball home with her right foot going in the near post to score against her old team, her smile lit the Phoenix ground up when the ball hit the back of the net making the score 0v2. We were still pressing having several corners and opportunities around the edge of their box but couldn't manage to get the third. Rotherham had the odd chance second half but we kept them really quiet, it was a solid performance. So, the final score ended with Charnock winning 0v2.

I am really happy with the performance, all 15 of the girls were outstanding. Ellie was amazing in goal today again, coming off her line and everything she had to do she did it brilliantly. Our back four were solid and very commanding. Our midfield looks good with some excellent passes and energy levels and our strikers were a nightmare for the Rotherham defence. Overall, I am very pleased with the win looking forward to next week now against Hallam Rangers. Thanks, Paul.

Rotherham Whitehill U15 v Charnock Girls U15 - Under 16