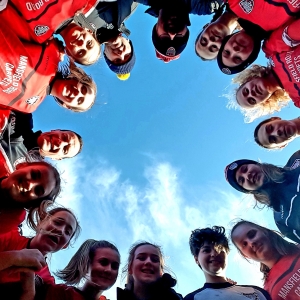 Looking back at our pre-season I couldn't be more pleased where it has gone. Going back to the lockdown I was so pleased with the girls’ attitude to do the fitness drills and ball skills on their own - it isn't easy to motivate yourself at times but so proud of the girls where they did it. So, when we finally got to training again the girls had a head start and that's one of the reasons why we have done so well in our friendlies.

Thanks to Michael, Martin and  Chris for the training drills over pre-season. Thanks to all the parents and everybody who has helped out with getting us sponsors and sold Spot the Ball cards.

Going on to friendlies, had six games and won five of them with some outstanding performances. One of these being a fun game with Charnock U13 Reds and all the rest were teams from the top league and we managed to beat four of them. These were really enjoyable games to watch and felt like Cup Finals! In our friendlies we have managed to score 20 goals which is a great achievement:

In these friendlies I've used quite a few different formations which the girls are getting used to. It's not been easy at times when the girls are only used to playing one position but they've adapted well in these friendlies. Having a bigger squad this season has given me licence to try different stuff and I've asked certain girls to change their game slightly.

One thing I did last season which worked well was having a regular 1 to 1 chat with the girls. During pre-season we’ve been trying different positions and formations with the girls, which sometimes takes a bit of getting used to so thanks to parents for continuing to give positive encouragement and praise. Remember conflicting instructions from parents on the side lines can be confusing for the girls.

I am really looking forward to the season ahead and hope you all are too. I'm sure if we carry on playing like we have we've got every chance of being in the mix this season. This is a very tough League, but the girls are up for the challenge and they've got a determination about them now and they don't like losing football matches!

Just a brief write-up on each girl over pre-season:

Ellie - she has become one of the best Keepers in our League, and in these friendly matches she's been outstanding. Ellie's all-round game has improved and what an outstanding performance against Crosspool.

Corah - had some outstanding performances in pre-season. Her attitude has always been good but this pre-season there is something special about her determination and Corah has adapted well playing at left back.

Shola - again had some good performances and just gets on with it. Shola has very good positional sense and her confidence is growing.

Harley - got my Most Improved Player last season and she started off pre-season the way she left off from last season in terrific form. Natural defender and always puts a good level of performance in.

Evie - Managers Player of the Season last year and again she has been outstanding in these friendlies, always putting in a fantastic performance. Evie is a brilliant captain and leads by example with her football ability and she has a great attitude.

Freya - a newcomer to us this season and is settling in very well. Freya can play a few positions which is always useful and her energy levels are outstanding. Good luck for your first season with Charnock, I know that you will do very well.

Leah - had an outstanding season last year and started off really well again. Leah has played in a slightly different role in friendlies and she's adapted brilliantly. Leah has got great positional sense and a fantastic left foot.

Morgan - welcome back, had some outstanding performances in friendlies. Morgan has played in central midfield and has been brilliant. She is very athletic, has great fitness levels and gets around the pitch well and this position suits her.

Hollie - great midfielder, box to box, helps out really well in defending. When we are attacking, she's always around the edge of the box supporting our strikers. Holly's attitude is great, she always give 100-percent and she is a great team player as well.

Sophie - not been an easy pre-season for Sophie with injury meaning missing a few games, but she has played really well. Sophie is an outstanding midfielder and had a great season last year and really looking forward to working with her again this season.

Emily – a versatile player who has been used in different positions including striker during pre-season. Emily really enjoys her football, is a great team player and always plays with a smile on her face.

Eva – another versatile player who can play different positions. Scored a cracking goal against Doncaster curling it in with her left foot. Eva is the joker of the team always making team mates laugh whilst enjoying her football.

Lily S - great technical ability, excellent skill in our pre-season friendly against Sheffield United when she flipped it over her head and played a lovely ball forward. Lily is a great team player and she never gives their defenders a rest.

Lilly P - welcome back Lilly, having already scored five goals in pre-season we are very lucky to get another quality striker to add to our team. Her finishing has come on so much and we are looking forward to the season ahead when I'm confident Lilly will be scoring lots more goals for us.

Molly – another great team player and has had a great pre-season, scoring some lovely goals especially the winning one against United. Unfortunately, injury is holding her back at the minute but when she he gets fully fit again we have got another outstanding striker with us.

Megan - has had a fantastic pre-season scoring eight goals including four against Crosspool with some outstanding finishes. Megan’s all-round game has been fantastic in pre-season but I've been so impressed with her hold-up play as well.

Looking forward to the start of a new season - Up the Charnock!