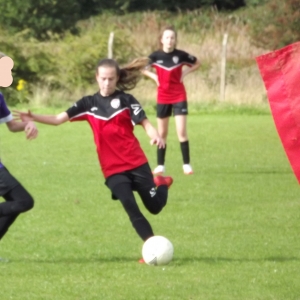 This week we hosted Pogmoor at home in a friendly giving the girls another big test and they came through this with flying colours. Again, challenging the girls playing a team from the top division and we couldn't get off to a much better start.

In the first few minutes Morgan took a long throw to find Megan who flicked a lovely header on to Lilly P who took a touch then let fly from around 25 yards, lobbing the ball over the Keeper to make it 1v0. Pogmoor really came back at us hard and started to dominate possession causing us problems, and it was only a matter of time before Pogmoor got the equaliser making the score 1v1. The girls were struggling a bit to get out of our own half, Pogmoor pegging us back, but great defending and covering tackles denied them scoring some more and then probably against the run of play our second goal came. Great pressing from Lily S and Lily P, the ball found Megan who took a couple of touches then struck a lovely right foot curling shot straight into the bottom corner making it 2v1. Then we started to believe a bit more creating a few more chances and denied another goal when the ball looked over the goal line but wasn’t given so the scoreline kept at 2v1 at H/T. Pogmoor for me was the best team in the first half and we were a bit fortunate to come in at halftime 2v1 up. But that's the sign of a good team, not playing brilliantly but still winning.

Second half we upped the tempo and started to play some good football getting much closer to Pogmoor and stopping them playing. I was pleased with the second half, the shape of the team kept very disciplined and very organised. We also looked dangerous going forward but just couldn't manage to get the third goal. So, the final score was 2v1.

Overall, so proud of the girls again today, another test completed by them. They dug in deep at times showing great determination, pride to wear the shirt and always looking a threat in front of goal. The game against Barnsley next week will be a massive test for the girls.

Thanks to Paul (Lilly's Grandad) for doing the card to pay for the referee today, and everybody who contributed to putting the nets and respect barrier up.