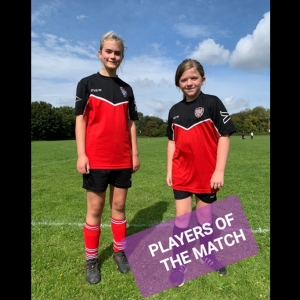 What a fantastic pre-season friendly playing Bramley Sunnyside, a pretty well established team. A midday kick off, lead to a pretty ambitious start by Bramley scoring in the first few minutes. The girls didn't see it coming and it was more haphazard than planned but they picked themselves up immediately and we saw a match of equal halves and a complete turn around from Thursday. We did an attacking formation, which the girls remained for the majority in position and after a constructive and positive team talk, the girls responded and passing was stronger, kicks were thought out and demonstrated well; the girls pressured Bramley and supported each other. Communication was excellent at times and the match was a breakthrough for the girls and sets a firm precedent for Purples.

It was evident early on that the girls meant business and Scarlett headed a strong midfield and her communication was excellent, managing to keep an eye on the ball and navigate herself while speaking to other players. That was tremendous!! Poppy pressured players and tackled down the right wing and was extremely responsive. She was cracking in a tackle, through midfield, sending the ball up to Ruby. Milly mirrored Poppy over the other wing and worked her space well, becoming a dominant player and isn't afraid to get stuck in. Milly saved many missed balls and some excellent through kicks to Ruby too. Asha's performance from the outset was dominating defence/midfield and drove 3 amazing kicks forward clearing well into central midfield and on several occasions, Asha repeatedly returned rebound kicks and worked incredibly hard gaining her Player of the Match. Maddie, continued to improve using space and again improving all the time heading off several attacks.

Our defence worked hard to keep the ball out of the goal end and Iris was excellent playing her trademark skill, sweeping the area, turning and blocking most attacks on our goal. Beautiful clearance kicks Iris! Leela tackled hard in deep defence, and in my opinion has improved incredibly never leaving her corner, pressuring players and being determined to pin down every attacking player. As did Diane, her best performance to date! Diane pinned down players and grew in confidence, diverting attacking players balls that broke through mid and Diane kept her head up and on point, ball kicks back through.

An excellent performance upfront with Ruby, our second Player of the Match, again driving the ball, supporting midfield and creating an opportunity which Asha, assisted and then took the opportunity to run the ball up to a few metres off the 6 yard box, to be tackled with haste. Asha, almost had her first goal! Superb work! Excellent assists by Poppy, Ruby, Asha, Scarlett, Iris and Chloe. Chloe continued to try a couple of positions, however making an excellent defensive tackle, pulled her side, but after a rest, gave midfield a go and was vocal on the pitch that she wasn't sure on her position. This showed excellent maturity and again great communication.

Our Captain for today was Ella, she worked incredibly hard in goal, kept an eye on her team, gave direction and made some difficult saves from attacks on goal by some fairly impressive Bramley Strikers, strong, fast and direct.

Heads down at training now to continue the hard work in preparation for our next friendly, which I will update shortly.
Claire and Marc