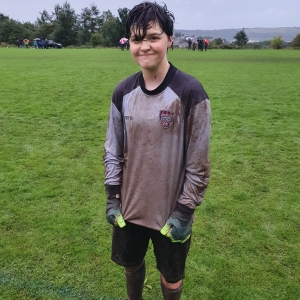 Going into this friendly on Friday night against Crosspool, we were full of confidence after recent performances. And the girls carried on their great form, even though the conditions weren’t easy for both teams with the wind and rain. But credit to both teams for playing some excellent football and making it into a real good match.

We started off with a different formation, taking the game to Crosspool playing with three strikers. And we started really brightly, first goal came from a lovely pass from Lilly P, found Megan, she took a couple of touches then found the back of the net to make it 0v1. Crosspool were really struggling with our three strikers, then the second goal came with a lovely volley from Megan hitting the target and their keeper just couldn't keep it out to make it 0v2 at half time. We were playing some really good football and keeping Crosspool quite quiet going forward.

Second half Crosspool stepped it up a lot and had a really good go at us. Crosspool managed to get a goal back making it 1v2. This was turning into a cracking match then Megan got her hat trick with a lovely finish putting the ball right in the top corner giving their keeper no chance - 1v3.

Then Crosspool scored again making it 2v3 - they were really coming at us but our girls stood firm and I was really impressed where our defenders put their bodies on the line. Ellie had an unbelievable second half making some fantastic saves keeping us in the game. Our back four stood strong with Corah, Freya, Harley and Evie stopping everything Crosspool threw at us.

We were still causing Crosspool lots of problems going forward, then our fourth goal came - again Megan was on fire scoring her 4th goal making it 2v4. Then to finish a cracking night off, last kick of the game Morgan took a free kick from 25 yards and buried it in the top corner making the final score 2v5.

Credit to both teams for an excellent match in those conditions.