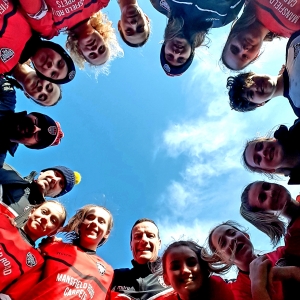 On a very difficult pitch, with the grass being quite long and having a slope on it, Chesterfield won the toss and decided to kick downhill at first. I said to the girls before the match, you need to start off strong - getting stuck in with your challenges, competing early on, and trying to win your individual battles. I thought for the first few minutes we started off well. Then with Chesterfield's first attack they scored with a long ball going down the right-hand side of our defence, their striker made no mistake by finishing it nicely. Then a blink of the eye it was 2-0, again getting caught out.

So being 2-0 down after 10 minutes was going to be a challenge. Our heads seemed to drop a bit and Chesterfield were winning the midfield battles, and getting through our defence, causing us problems. Then they made it 3-0. After that we started growing into the game a bit more by attacking and causing them some problems at the back. The first chance came from a lovely ball from Lily, which found Megan, went through one-on-one with their keeper and she managed to save it with her legs, knocking it out for a corner. Then shortly after, a chance fell to Megan again, this time the keeper made a fine save at her near post. Then Chesterfield made it 4v0 with a great shot from around 20 yards giving Ellie no chance. Making it a 4v0 scoreline at H/T.

I said to the girls at half time I was disappointed, I thought we were slow to react closing them down, letting their players just run past us without challenging. We were only giving 60% when they normally give 110%. I said beforehand to them don't go home with regrets - it's a one-off game. Give it everything.

The second half kicking downhill and what an improvement in performance! The girls gave it everything. Winning individual battles and looking more focused and committed. We started to create chances. I lost count on the chances we were missing. Lily was a bit unfortunate with her shot going wide, then another one fell to Megan who just missed the target. Then it was Eva’s turn to have a shot at the back post, which just went wide. Then our luck changed -Eva Scored a lovely goal, curling a left footed shot in the bottom corner. Then Megan scored - squeezing a shot under the keeper, just going over the line making it 4v2. Chesterfield were hitting us on the break, still causing us problems but staying much stronger, and keeping them out. We kept going but unfortunately ran out of time, losing the game 4v2.

After the game I got the girls around for a big huddle, and basically told them we lost the game in the first 20 minutes for not competing. But so proud of them the way they came back. The second half we were fantastic, a great battling show. They gave 110% in the second half. It was a game of two halves and the girls should be really proud of themselves for reaching a semi-final. I said to them if you keep performing like that your time will come for a final.

I was a really proud manager today. I've got a special bunch of girls who I love working for. We keep going, learning and enjoying our football. It's a pity we didn't get to the final because with the efforts the girls have put in this season up to now, they deserved something. Hopefully next year.

A special mention today for Molly who came and supported us, and to Ryan for refereeing the match - did a brilliant job. And thank you parents for your support.