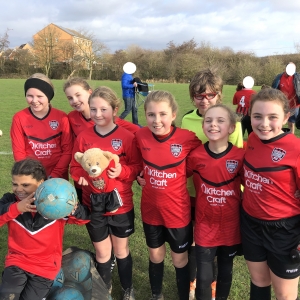 On Saturday we travelled to Bramley Sunnyside in Rotherham.

We were down to 8 players this morning, what with a few recent departures from our team and illnesses, so all the girls were guaranteed plenty of playing time.

We started off kicking into a strong wind and really struggled to get the ball out of our own half at times, but this didn’t deter our lot and they created a couple of great chances, with Demi and Lottie coming close to getting goals.

The defence and goalkeeper were kept very busy this half but both Milly and Lillian did great making endless tackles and interceptions!

The halftime break came and we were just slightly behind but had everything to play for in the second half as we now had the wind behind us. Diane went in goal for this half and Effy was back in her usual position of midfield.

Lillian had a brilliant game, showing real strength and determination to tackle their strikers but instead of just getting rid of the ball she constantly ran down the wings and made endless passes to Daisy on the left-hand side, this performance earned her the Star Player award.

Daisy was another who had a great game, her quick feet and confidence to take players on improves every week, Daisy was awarded the Charnie bear for her efforts!  Well done you two!

Tilly is another who always impresses, her second half performance was brilliant, she made endless tackles and put a 100% shift in, constantly pressuring their players when they had the ball, well done Tilly.

Demi had to make a couple of cameo roles playing in defence this morning but she looked like she’d been playing there for years! Her calmness when on the ball was brilliant and confidence to put some meaty tackles in was very impressive! Well done Demi!

The girls really did deserve something out of this game, their second half performance was very positive, with Daisy hitting the post from a free kick and Milly with a very unusual long-distance half volley in the last seconds that just went wide!

Effy did really well in the 2nd half, her confidence to drive forward with the ball really helped her team, taking the pressure off our defence and linking up well with the forwards, well done Effy!

Lottie had a quiet 1st half but really got into the game in the 2nd half making some great tackles and linked up brilliantly with Tilly and Daisy in Midfield, well done Lottie!

Diane went in goal for the 2nd half and also made a few important stops on the rare occasion they got past Lillian and Milly!