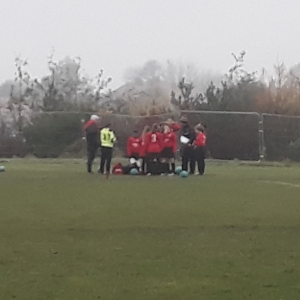 Today we faced Dronfield Town at home in the cup.

The girls started off quite positive and more alert than in recent games, they were under constant attack from the Dronfield team but were defending really well.

Faith unfortunately come off after 10 mins with an injury which left her side-lined for the rest of the game, this just left us with Effy and Milly in defence as Lilian was also injured for this one. The pair of them and our keeper Diane defended brilliantly but Dronfield soon broke the deadlock and took a 4-nil lead into the halftime break.

Despite the score-line all the girls in midfield and attack threatened the Dronfield goal with loads of shots in the 2nd half but just couldn’t get that goal they deserved.

Daisy was awarded the star player today for her attitude and effort she put in for the team, she moved back into a central midfield role during the 2nd half to try and get the ball forward more, she impressed me with her movement, positional play and being confident to take players on, well done Daisy, keep it up!

Erin, Demi, Lottie, Scarlett and Tilly also impressed me with their never give up attitude despite the score-line, well done to you all.

We’ll hopefully have a full fit squad next weekend when we travel to SUFC for the last group game of the cup.