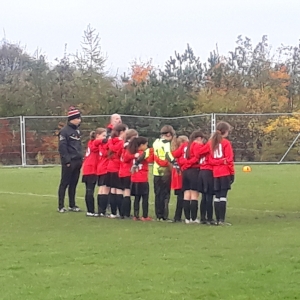 Today we faced Kiveton at home.

Our pitch was in great condition considering all the rain we’ve had recently.

The girls started off really well against a very organised Kiveton, with Effy, Demi and Lottie as the midfield 3 covering plenty of pitch, helping the defence and attack all morning!

Our goalkeeper Diane had a brilliant match making save after save to keep her team in the game, well done Diane!

Our defence had a busy morning too with Milly, Faith and Lilian making some great interception’s and tackles throughout the game, Milly’s performance and positive attitude earned her the Charnie bear award too, well done Milly. Faith was moved into midfield in the 1st half and she made a massive input on the game, her strength and passion to drive her team forward was all there to see this morning, earning her the star player award!

Tilly, Erin and Daisy all did well today, Tilly carrying on with her good performances of late, Erin with her constant leggy runs forward and Daisy doing well in attack for her team.