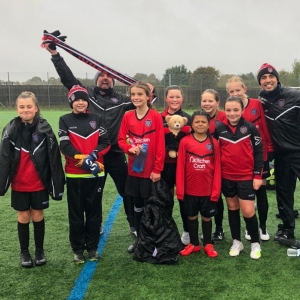 Today we travelled to the Keepmoat Stadium to face Shoot Sirens FC.

Luckily our game got the go ahead as the fixture was on a 3G pitch.

We had 3 girls away today so just the 8 players but they all arrived on time and keen to get this South Yorkshire derby kicked off, despite the torrential rain and freezing temperature!

Diane was our captain this morning, she had a reasonably quiet game but when called upon she made 1 or 2 very important stops for her team, great captains performance Diane!

I gave Faith a little task for today’s game, I asked her to try something a little different when she goes on her powerful runs forward from the back with the ball, she did this to a tee and had a faultless game! This earned her the Charnie bear award which was awarded to her by the Shoot Sirens coach!

Lilian was another I gave a little task to, I asked her to start putting her foot on the ball more often when she wins her tackles and start looking for a pass to a team mate rather than just putting her foot through it and clearing the ball out, again she did this time after time and also had a faultless game! Well done Lil!

Effy probably played her best game of the season so far this morning! She played a near perfect midfield role, winning tackles all over the pitch and always driving forward with the ball, coming close to notching in the 2nd half but for their keeper making a few good stops! Her efforts won her the Star player award today, well done spud, keep it up!

Today’s was Demi’s first game back after a foot injury last week but she also played a great game, she always links up well with Tilly when they’re on the pitch together and ran the Sirens defenders ragged in the 2nd half, beating 2 and 3 players time after time and having plenty of shots at the opposition’s goal, well done Demi

I had a chat with Tilly before the game and told her to just keep doing what she’s been doing for the last 3 games for her team, she has been 1 of the stand out players for me this season, her attitude and confidence on the pitch has been brilliant to watch this season…well done Tilly

Scarlett is still relatively new to proper football but her attitude to learn the game is all there to see, she put a big shift in for her team this morning in horrendous conditions on a very long pitch but kept going right to the end for her team, keep it up Scarlett

Erin is another who’s having a brilliant season so far for Charnock, always very positive and direct on the pitch with 1 thing on her mind and that’s to find the onion bag! She is showing a real goal poachers’ instinct, great game Erin, keep it up!