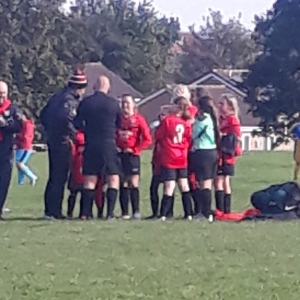 After a tough few weeks against some good teams our U11’s were in for another battle against Pogmoor.

We unfortunately started off with our heads in the clouds and went behind very early in the game and created a very big mountain to climb to try and get anything out of the game. The girls finally woke up and finally put a stop to the Pogmoor attack, Faith, Milly, and Lilian defending superbly in union with Effy making several good stops in goal too!

Half time come and we got the girls together for a good chat, didn’t need to say that much as they’d already started to get back into the game to be honest!

The second half got underway and our midfielders really started to take over the game with relentless tackles and attacks. Scarlett and Lottie partnered up great in the middle of the pitch, their confidence really grew with both of them constantly trying to win the ball back and drive forward, our other 2 Demi and Tilly were much the same, really putting a shift in, up and down the pitch all morning, Tilly carried on from last week’s star performance and played brilliant once again and Demi’s hunger to track back, win the ball and make a pass forward was top notch too!

Our front 2 of Daisy and Erin were on fire in the 2nd half. Daisy can get so frustrated when the game doesn’t go her way sometimes but she kept plugging away and made a couple of assists towards our goals this morning. Erin played her best game for us today, her runs forward and confidence to get past the Pogmoor players were relentless, the Pogmoor players didn’t know what hit them in that half!!

Not forgetting our defenders and GK too for their 2nd half performance, Milly, Lil, Faith and Effy all kept us in the game on more than one occasion!!

I would like to mention how nice the Pogmoor coach Mark was during the HT break, we were a few goals behind but he came over to help gee our girls up and also handed out some Haribos! Also the referee Stephen Joys who spoke to the girls before during and after the game, constantly supporting and encouraging them!

The referee awarded Charnie the bear to Faith for her superb match today and I awarded the Star player for Erin!